USAID’s Competitive Economy Project is building awareness around opportunities for Serbia to innovate and increase trade, expand business partnerships, and attract investments. This includes outreach activities in traditional media, and a substantial social media presence. One year into the project, it has surpassed 10,000 followers on Facebook, largely by promoting project activities like trade fairs, conferences and the Premium Food Design Hub. The project’s communication team also publishes news about trends in the food industry in Serbia and trade developments. These communications efforts are critical to the project’s goal of growing the market for Serbian agricultural products and increasing Serbia’s economic competitiveness.

Serbia’s National Alliance for Local Economic Development (NALED) is working to institutionalize the public-private dialogue process that has contributed to some of Serbia’s most successful economic reforms in recent years.  NALED has selected three organizations and reform topics to start their new USAID-supported project, including: working with the Association for Development of Entreprenuership in Nis on tax policy for entrepreneurs; the Association of Beekeeping Organizations of Serbia on public use of insecticides; and the Agro Cluster from Novi Sad to improve policy around organic farming. These partners were selected through a competitive process involving the Serbian Public Policy Secretariat, based on the likelihood that dialogue will be able to impact policy. NALED is now working with the selected partner organizations to identify stakeholders from the private and public sectors  to form working groups, as key vehicles for pursuing selected reforms.

As part of their two-year grant with USAID, The European Movement in Serbia has conducted extensive research on citizen satisfaction with public services in Serbia. The purpose of this research is to strengthen citizen input in government decision making. So the European Movement was pleased to find in the annual report of Serbia’s Commissioner for Protection of Equality that their research on the perception of accessibility of public services and discrimination in health care was featured prominently. The report of the Commissioner, which is presented to the Serbian Parliament, is an example of how, with USAID assistance, Serbian civil society is providing evidence-based input that is used by relevant state institutions to inform policy.

When Serbia’s Law on the Protection of the Right to Trial within a Reasonable Time came into force in 2016, it was intended to bring Serbia into alignment with EU standards for efficient justice.  Prior to passage of the law, the top complaint against the Serbian government in the European Court for Human Rights was unreasonable delays in the delivery of justice. Settling cases before trial is an important tool to ensure swift justice and avoid overburdening the courts with cases that do not require litigation. However, the past two years of implementation of the law have shown a sharp decline in the interest among citizens to settle cases with the state stemming from the breach of this right. On the other hand, the number of claims before the courts for damages deriving from these cases is steadily increasing – the value of the current caseload is approximately three million Euro. It is clear that the manner in which case settlements are being offered is not the compelling alternative to litigation that it is intended to be.

USAID’s Rule of Law Project is working to address this challenge by building the capacity of the State Attorney’s Office, and promoting more effective use of settlement as a tool in upholding citizens’ rights. The project recently held the first of a series of events gathering representatives of the Serbian government, judiciary, and legal community to discuss how to decrease the inflow of this type of cases into the courts, how to prevent further impact on the state budget, and, most importantly, how to make the out-of-court settlement an effective legal remedy. Participants called for urgent action on this issue, and supported the State Attorney’s proposal to draft guidelines on the implementation of settlement agreements, and raise public awareness of the advantages of out of court settlement. The project will continue to support these efforts and other measures to improve the delivery of justice in Serbia.

USAID Mission Director Azza El-Abd and Minister of Public Administration Branko Ruzic  opened a new water reservoir, constructed as part of USAID’s $2 million support to mitigating the impact of the migration crisis on Serbian communities. This is one of many projects supported by USAID and UNDP to improve infrastructure that will contribute to communities’ resilience to shocks, either natural disasters, or conflict-driven migration flows like those seen in recent years.

The water reservoir will provide a safe and dependable source of water for local citizens and migrants staying at the nearby Asylum Center. As Minister Ruzic stated "the residents of Tutin, and migrants, deserve clean, healthy water and this is why we need to continue to listen to the needs of local communities, especially in collaboration with international organizations that are more than willing to help solve the concrete problems of our citizens." 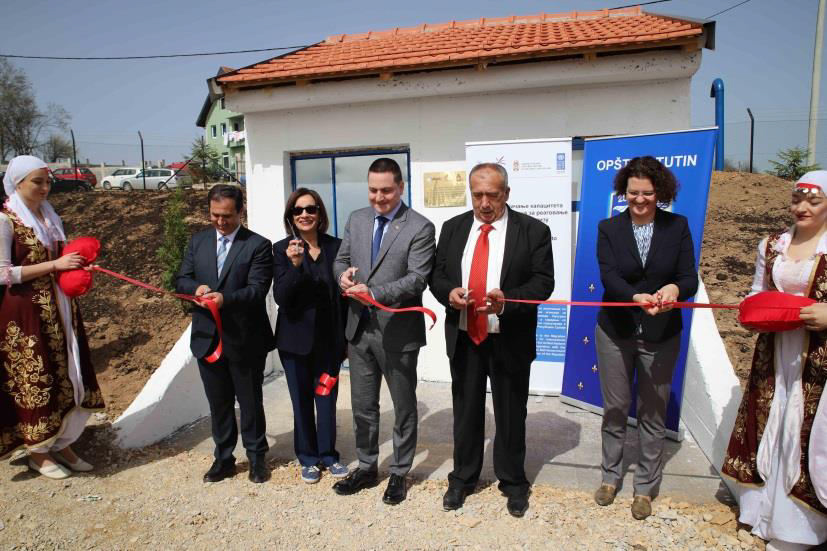