EXPORT ARRANGEMENTS WORTH OVER EUR 17 M NEGOTIATED AT MOSCOW FAIR

The presentation of Serbian businesses on this renowned international event was organized by the Serbian Development Agency (RAS) and the Chamber of Commerce and Industry of Serbia (PKS) with the support of UNDP in Serbia.

At the WorldFood fair that took place from 11th to 14th September, the representatives of Serbian companies had as much as 500 bilateral talks and meetings with partners from Russia and other countries interested in exporting food from Serbia. Russian federal and regional trade chains and distributors expressed an impressive interest in products coming from Serbia, from confectionary industry and meat products, fresh, frozen and processed fruit and vegetable programmes, to different types of beverages and eco-products.

The national stand of Serbia was visited by the delegation of Magnit, the largest Russian trade chain whose goods are being distributed through the network of 15,000 retail stores. In the period from 2014 to 2016, Magnit from Serbia imported USD 187 million worth food products, and as estimated by procurement managers of this chain, the cooperation with Serbian companies has been unwavering and steady, without unexpected situations.

The stand was visited by the State Secretary of the Ministry of Agriculture Bogdan Igić, Special Advisor to the Minister of Agriculture Predrag Lučić, Serbian Ambassador to Russia, Slavenko Terzić and held the meeting with the Russian Federation Deputy Ministers of Agriculture Yevgeny Gromyko and Yevgeny Nepoklonov in the course of which they agreed about further joint actions.

Serbian companies are interested in presenting their products and participating at similar exhibition events in Russia, Commonwealth of Independent states and Middle East.

RAS and PLS will, in the next period, organize the participation of traders at the upcoming international exhibition of food in Russian Federation – Prodexpo 18. 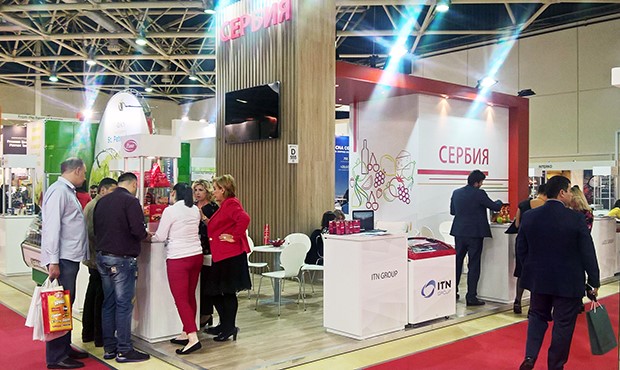